Can you believe that this remarkable gem has only been around for 50 years? That's right, tanzanite, in all its varying shades of blue and violet, hasn't been in the jewelry industry as long as diamonds or rubies. Only one place in the world has tanzanite. Isn't that something?

Tanzanite is found in only one place in the world: Merelani, which is north of Tanzania in East Africa. Merelani is also near Mount Kilimanjaro, which is also enjoyable.

How the origin goes in the industry is that Ali Juuyawatu, a Masai tribesman, found bright blue gems weathering away from the earth and quickly informed a local fortune hunter of the blue jewels. The fortune hunter, Manuel D'Souza, registered four mining claims, thinking that the blue gems were sapphires.

To promote the gem in the market, Tiffany & Co. named the new variety of zoisite "Tanzanite" after it's the exotic origin. And we can all agree that tanzanite is a lot easier to say than "transparent blue zoisite." After Tiffany gave tanzanite an unforgettable name, it sold as an alternative to sapphire, which was scarce at the time. For full disclosure, tanzanite is a six and a half to a seven on the Mohs Scale of Hardness, meaning it is more vulnerable to scratching and abrasion. While tanzanite rings are pretty, the gem will be much safer set into earrings, necklaces, and brooches (like our simple stud earrings, for example). They're safe, and the gorgeous color remains intact. Check them out here. You can see in the tanzanite studs here, shades of purple and blue in the same at the same time. That, my dear readers, is pleochroism.

What's remarkable about tanzanite is the color origins. Originally, tanzanite is a reddish-brown color, but after it is heated, a striking bluish-purple appears Heated traces of vanadium cause the mesmerizing blue color. It needs low temperatures (specifically between 1100 to 1200 degrees Fahrenheit) to remove the brown color and achieve the beautiful bluish-purple we all adore. The first tanzanite gems discovered in 1967 were heated by the African sun for heaven knows how long. 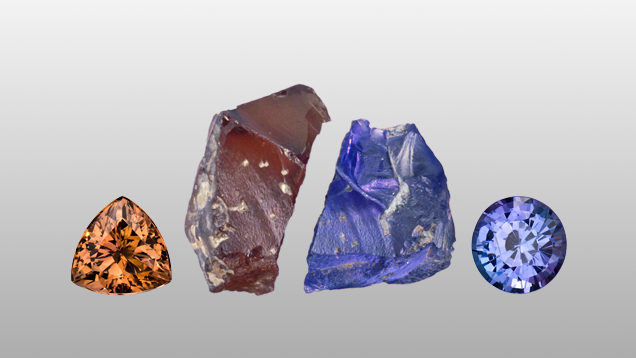 Another delightful quality about tanzanite is its pleochroism, where different colors appear at different angles in the gemstone. In one tanzanite gem, you can see blue, purple, and violet. How cool does that sound? Because of the pleochroism, cutters have to be careful when they cut tanzanite rough. Tanzanite is an exotic birthstone found in only one place in the world and makes a one-of-a-kind gift for a one-of-a-kind person. I'm glad December babies have tanzanite as a birthstone, along with turquoise and zircon. We will get into those other blue gems at different times.

Thank you for stopping by. We hope to see you soon.