Holy Topaz, indeed. November snuck upon us with the bitter weather, cozy sweaters, and fiery gemstones. Topaz and citrine, appropriate gems for keeping the autumn chill at bay. I will elaborate on citrine soon. For now, we'll revel in the warmth that is topaz.

Unfortunately, a lot of people don't care for topaz because it's usually in a brownish or yellowish color. I'm happy to tell you, beautiful readers, that topaz comes in a vibrant array of colors. Isn't this remarkable? It's on display at the Smithsonian in DC.

Imperial topaz is the most valuable variety of topaz. One of the rarest and most expensive topaz colors, it comes in rich reddish-orange to orange-red hues. The royal court in Portugal celebrated the Imperial topaz discovery in 1768. It can be found in Minas Gerais, Brazil, in Ouro Preto at the Capao Imperial Mines. Imperial topaz used to be found in the Ural Mountains in Russia during the 19th century, where the name "Imperial Topaz" originated. The name was to honor the Russian Czar, and only the royal family can possess Imperial Topaz. 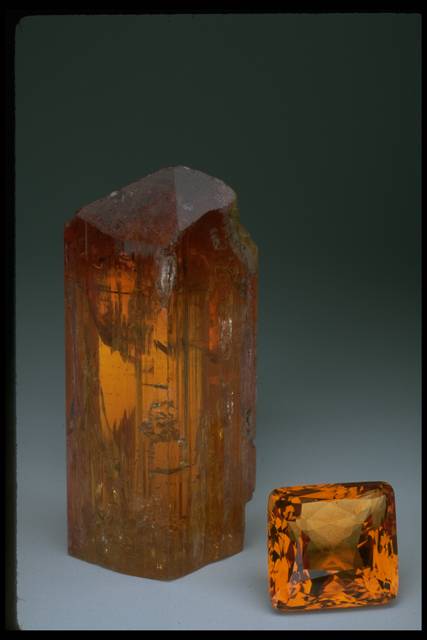 Photo by Chip Clark. Smithsonian website. I can understand why Imperial Topaz used to be only for royalty.

Blue topaz, like Imperial topaz, is a rarity in nature. Thankfully, the beautiful shades of blue are plentiful in the market after heat treatment. Or after a combination of radiation (which is at a safe level) and heat. The procedures needed to produce blue has been around since the 1970s. The blue develops after treating colorless topaz with subtle imperfections in their crystal structures. Depending on the results, blue topaz can go by a selection of trade names like London blue topaz or sky blue topaz. Our 14K Blue Topaz & .05 CTW Diamond Ring holds three different types of blue topaz in one extravagant ring.

These blue topaz gemstones were stunning with the warm colors of yellow gold and rose gold. This beautiful topaz specimen is naturally blue, a rarity in nature.

We can all agree that topaz deserves more credit for its colorful variety than we previously thought. I'll delve into more detail on topaz next week and then, citrine! Enjoy your weekend, everybody!